I was invited to present at the 2018 Swinburne University Learning Transformations Conference which was held on Thursday 29th March.

This is an annual event run by the Learning Transformations Unit which is responsible for the exploration and exploitation of learning technologies at Swinburne as well as the resourcing, preparation and scholarship of Swinburne staff; and the development of partnerships that increase and extend Swinburne’s online provision and presence.

I was presenting in the employability stream and my topic was Focusing on creative problem solving skills will enhance employability in the age of automation. As you can see from the above image (thanks to Adobe Character Animator), Rob the Robot made another staring appearance.

I shared some of the research around future job skills and the potential threat of automation and computerisation. A 2015 CEDA (Committee of Economic Development of Australia ) warned that more than five million jobs could disappear in the next 10 to 15 years because of technological advancements. It threatened that computerisation and automation could see more than six out of 10 jobs in rural and regional Australia vanish.

A 2017 report by PWC, titled Workforce of the Future: The competing forces shaping 2030 surveyed 10,000 people across China, India, Germany, the UK, and the U.S. with an aim to “better understand the future of work.” 37% said that they thought artificial intelligence and robotics will put their jobs at risk, up from 33% in a similar study in 2014.

We looked at a 2013 study by The University of Oxford titled The Future of Employment: How Susceptible Are Jobs to Computerisation?  It claimed that 47% of jobs are at risk of being automated in the next 20 years. It also provided a website that allows users to type in the name of a job and it will give them the probability of that job being computerised in the future.

We looked at the recent ISA (Innovation Science Australia) report that indicated that automation is not necessary a bad thing. It said that our ageing population is likely to create a 6% shortfall in the number of workers needed to maintain our current GDP (Gross Domestic Product) growth in 2030. It suggested that Innovation and digital technologies such as automation and computerisation will help fill Australia’s future labour gap, by improving productivity and performing tasks workers do not want, or need, to do. It also inferred that more jobs will demand 21st‑century skills, such as interpersonal skills, entrepreneurialism and creative problem solving.

Another point of interest from the ISA study is that in the future and current age of automation, more jobs will demand 21st-century skills such as interpersonal skills entrepreneurialism and creative problem-solving skills.

If students are encouraged to develop skills & techniques such as creativity that computers can’t yet manage, then they are preparing themselves for a brighter future.

Find out more via – http://cps.adobeeducate.com/ 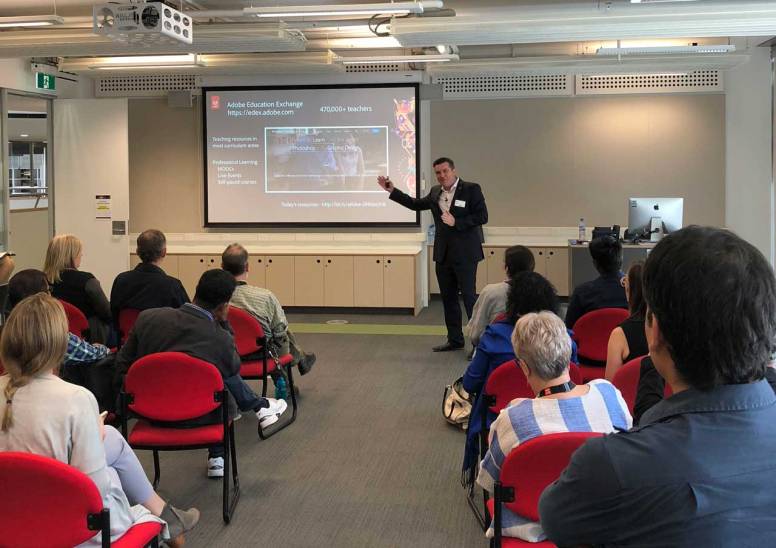 There were some interesting tweets shared during this session …

So many Adobe products available for staff and students – really impressive work being done. 20 Adobe Creative Cloud products available on Swinburne-owned PCs through the Application Catalogue, plus heaps of free ones online @timkitchen #SwinburneTLC L

The World Economic Forum has forecasted the top 5 employability skills for 2020 as being: complex problem solving, critical thinking, creative, people management, and coordinating with others #SwinburneTLC @timkitchen

How secure is your job in the future? Will technology replace your job? The University of Oxford website will forecast it #SwinburneTLC @timkitchen

@timkitchen looking at the jobs of the future — and those that are likely to be swallowed by automation #SwinburneTLC. Pro-tip: academics are fairly safe.

@timkitchen we learn from failure — we should create opportunities for students to try, fall short, learn and try again #SwinburneTLC

@timkitchen Most believe creative problem solving is important and will be so in the future. But most agree we are not doing enough to foster it in the classroom. #SwinburneTLC

Should everyone learn to code? @timkitchen is concerned we may have the wrong focus. Many coding jobs may be automated. 21st century skills/capacities such as creative problem solving, collaboration and interpersonal skills can’t be automated. #SwinburneTLC #employability

The full set of resources I shared during this session can be found on the Adobe Education Exchange via – http://bit.ly/adobe-29March18