One of greatest joys of being a teacher is watching your students grow up and succeed in their chosen field. One such student for me is Richard Gray.

Richard was one of my star music students in the early 1990’s at Kinswood College in Box Hill. He stared in my first original musical production, Jagged Hearts in 1992. We have been in touch over the years and I have been very proud of Richard’s considerable achievements at Kingswood, then at the Victorian College of the Arts and now with the production of his first full feature film (six years in the making) Summer Coda. 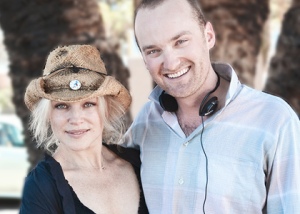 Richard Gray with Susie Porter one of the starts of Summer Coda
Image source – http://blog.thatsmelbourne.com.au/hot-spots-miff-spotlight-richard-gray/

Click here for more details on the Richard and his first film.

Richard was in touch last Friday (3rd August) to invite me and my film students to the opening of Summer Coda at the Rivoli Cinema on November. He also accepted an invitation to come to my film making class at Strathcona to chat to the girls about how he got started and what it was like producing a full feature film.