Having digital media and communication skills is not only a requirement in most careers these days, it is also a significant way to stand out from the crowd when applying for a new job, course of study or promotion. Skills in image manipulation, video production, online communication, animation and publication are not only fundamental to most jobs in the digital media industry, they are also considered important 21st century workplace skills in just about all careers, including education.

Many job applicants say they have digital media skills, but that is hard to prove unless they have formal certification that is recognised by industry such as the Adobe Certified Associate (ACA) qualifications.

ACA is a formal set of industry recognized qualifications that can be completed while doing secondary and post-secondary studies or while working and wanting to have skills formally recognised for promotion or new opportunities.

Worldwide, ACA is managed by Certiport who are also responsible for Microsoft certification. More locally in Australia and South East Asia, Certiport’s partner organization XCERIO are the main point of contact.

The 2016 ACA Study was undertaken late last year by Edelman Intelligence and Adobe with over 1000 current and aspiring digital media employees aged 18-29 (with and without ACA certification) from the US, Mexico and South Korea. Just under half of them (504) were ACA holders and 562 of them did not have an ACA qualification. 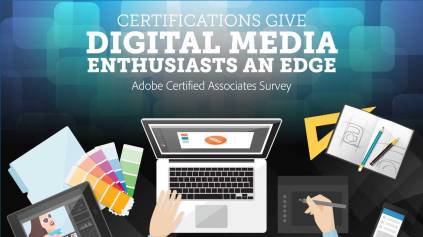 According to the study, 72% of the respondents reflected that they are excited about future opportunities within digital media and 74% perceive the digital media field to be more competitive compared to five years ago. However, with growth comes more competition with over half (56%) of respondents expressed concern about their ability to stand out.

Two-thirds (67%) wish their high school had offered courses/programs to help them learn how to use digital media tools. Nearly three quarters (71%) of the respondents said that if they had the opportunity to learn digital media skills in a formal education setting, they would be further along in their pursuit of a digital media career.

Standing out from the crowd

Having formal ACA qualifications helps candidates to stand out, be competitive, develop confidence and demonstrate their proficiency in digital media tools. Two-thirds of both ACA holders and non-ACA holders agreed that completing the ACA can help candidates stand out from their competition, and that having ACA improves their overall confidence. 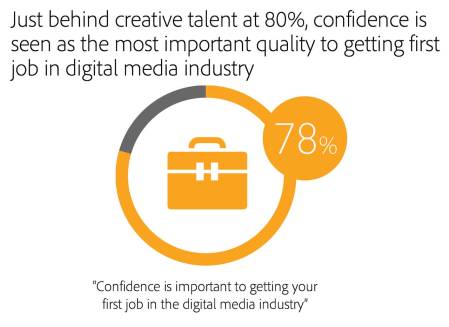 ACA holders are nearly twice as likely as non-ACA holders to feel ahead of the curve compared to their competition with 66% of non-ACA holders agreeing that the ACA would have helped them prove their digital media skills to prospective employers if they had been given the opportunity to complete it as part of their K-12 or post-secondary education.

The survey asked what can help a résumé stand out if the applicant lacks previous digital media experience? The top answer (61%) was a demonstrable knowledge of digital design tools. Over half (56%) said a demonstrated ability to work across multiple devices, platforms and programs. Again, over half (53%) said a portfolio that demonstrates digital media capabilities and just under half (49%) said the résumé needed to be visually appealing and 47% said that indicating the completion of 4-year degree in digital media was important.

Adobe, like other major multinational IT companies, receives 100s of résumés per month. One of the Senior Directors told me once that he divided the résumés that he had to deal with into three piles before choosing potential candidates to be short listed for an interview. The first pile were all text and paper based, and generally they were ignored. The second pile featured an image of the candidate with a link to a blog, online portfolio or website. These résumés were looked at an considered for the next stage. The third pile was almost guaranteed an interview because they featured a video of the candidate outlining who they were, what skills they had and why they should get the position. A video based résumé is a great way to stand out from the crowd.

Digital Media as a career

Nearly three quarters (72%) of respondents are excited about their future opportunities within a digital media career with over half (56%) planning to stay within the digital media industry for their entire career.

If you are interested in finding out more about the Adobe Certified Associate and you live within Australasia go the this site – http://www.xcerio.com/certifications/adobe/

Click here to see the Adobe Education blog about the ACA research.

Click here to learn more about how to prepare for an ACA examination.

If you’re already an ACA holder, check out the Adobe Certified Associate World Championship to potentially represent your country at Disney Land, California.